They promised us a warm September week, which to a degree it has been. The temperatures have hovered at around 20 degrees for most of the week. The skies have been more grey than blue. I have though found a couple of things that have brightened up my days.

In our back garden we have two yellow standard roses. One of these has been flowering on and off all summer the other has done nothing. Yesterday I was gazing at the flowering rose and noticed that one of the new flowers was not actually yellow. 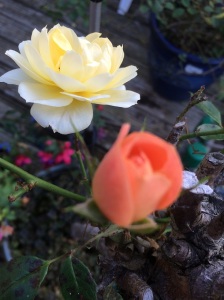 doesn’t this bring a smile on a grey day.

When I came home for lunch earlier in the week we were standing outside chatting about our morning when I noticed we had company. On the flat roof of the extension was one of our little feathered friends. He/she was singing away almost within  touching distance. As I watched he/she flew down onto our table before running around on the decking. Finally he/she came to rest on the corner of a plant pot. Would you like to see who our visitor was?

I waited a few seconds before taking this next photo.

Can you believe I was standing just a few feet away from him/her. This will give a better idea of how close we were.

I am hoping that over time we will become better acquainted.

Oh and I nearly forgot to mention that the other morning we had another visitor. It was Owl who spotted it first, just as he called out ‘look’, I saw a flash of yellow landing briefly on the rail by the shed. I didn’t have time to take any photos before it flew off again. I did get enough of a look to be able to identify our new visitor as a gold finch. The first I have seen that close up.