Recently I have been watching them in the mornings whilst I munch on my cereal before heading out to the office. It has lightened my mornings just to see them. The first time there were two and they were being fed by their parents on my feeder. It was a pure delight to see these two balls of yellow feathers sitting almost motionless on one of the arms. Their parents fluttering back and forth from the half coconuts, filled with suet and seeds, to the metal arm where their babies waited.

Two mornings in a row I witnessed this natural event. The next day was very windy, the chicks were nowhere to be seen but the adults were flying in and out of the garden. Watching them I soon realised that as they flew off over the hedge to disappear into the trees outside our land, it was two not just one tree they were heading for. Could this be two different families I was seeing?

A few mornings later I noticed a lot of activity on and around my bird feeder. I managed to count 7 blue tits at one time. With all the activity of these tiny birds darting in and out of our cherry tree, our magnolia tree and our hedges as well as landing on the feeder it is not easy to keep track. It would appear that whilst still being fed by their parents, the little ones are now trying to feed themselves. The suet balls and the peanuts seem to be popular, not so much the seed feeders.

The little ones no-longer appear to be  fluffy balls of yellow feathers, they are taking on the more muted colours of the parents. This makes it harder to identify which are adults and which their chicks until I see them being fed.

Yesterday after my return from work, I noticed that one of the feeders had fallen. I went out into the garden, armed with a bag of feed, to retrieve the missing feeder. Before I stepped outside there had been several blue tits out there. Now there was just one solitary little bird, I expected it to take flight as soon as it saw me.

Approaching slowly I got closer and closer still it continued to feed. I could hear the warning cries from another blue tit high up in the magnolia tree, another on the hedge but still this little one continued to peck away at the peanut feeder.

To my amazement not only did this one stay put but a second arrived, landing first in the cherry tree before joining the first brave little soul on the feeder. Still just moving one slow step at a time I continued to move towards the feeder. I couldn’t have been more than three feet away. 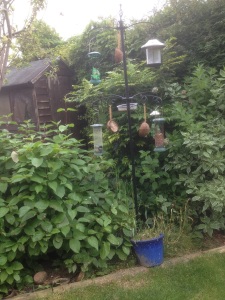 can you see them both here? I could almost reach out to touch them before they took flight. I then replenished the now retrieved feeder before heading back inside. After my delightful experience I decided to sit out on the steps leading from the decking down to the lawn. I wanted to see if the blue tits would return whilst I was there. Would they get used to me being in the garden with them? I sat for several minutes before there was movement in the ailing cherry tree. Soon they were going about their business not worried that I was sat just 9 feet away from them. I stayed where I was for about 5 minutes before I left them to it.

Not much later I saw a lot of wing fluttering beside the tree, it was the male greater spotted woodpecker that I have now seen 5 times in our garden. Unfortunately he shot off into the distance as soon as I stuck my head out of the door.

As I sit here now I can seen the blue tits flying around.