When I met Owl he warned me that he was something of a petrol head. He has a passion for American Muscle cars. At that time he owned a Ford Mustang which he drove as his every day car. Not a cheap car to run I can tell you, I think it averaged about 15 to 18 miles to the gallon but he loved it. He had had the car for a long time 12 years I believe. But after his mother died he needed a bigger more practical car for carting stuff to the tip etc. This was just not going to cut the mustard as they say. Besides being a true American car it was left hand drive.

One thing I didn’t want to do was drive left hand. He wanted me to be able to drive his car. I shall never forget the time we were driving up a dual carriage way and he decided to overtake the vehicle ahead. I couldn’t get used to being in the right hand seat and not being able to see into the rear view mirror so I looked into the wing mirror. Where I saw a flash of silver metal growing at a rate of knots in my mirror. How I didn’t faint or worse have a heart attack (I am getting old you know) I shall never understand. He just managed to get back into the inside lane by the skin of our teeth.

Now because we needed a bigger vehicle and I refuse to drive a left hand car on roads built for right hand drive cars, you could be forgiven for thinking we would get a  van or a traditional range rover or any one of the now popular ‘Chelsea Tractors’ that flood our suburban streets. But remember I said at the beginning of this post Owl likes American cars. We bought an American Truck. A Chevrolet Blazer LT to be exact. My first thoughts when we test drove it were ‘please don’t make me drive it’ . It is some what bigger than my Toyota Corolla Hatchback 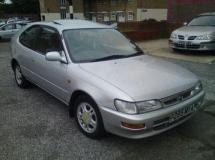 But sure enough we had not been in it for long when he stopped got out and came around to my side of the truck and told me to get in the driver’s seat and drive it. With much trepidation I did, and hey it was ok, a little scary but I managed it.

Now nearly a year later my little car has gone to the great car heaven somewhere else having had the engine catch fire whilst my son was driving her (I am so glad it wasn’t me). The car I drive every day is our big beautiful black blazer. 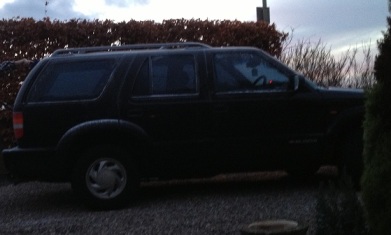 Owl loves it when he hears me drive up the road he says the burble she makes with her V6  4.3ltr is almost as good as his V8  5ltr Mustang. But he does say that I do look very small in the driver’s seat.

Owl does say that he would love to get another mustang one day possibly either a Shelby GT350 or a 1966 Eleanor.

What car do you drive and if you could choose the car of your dreams what would it be. Mine used to be a white triumph stag but these days I am looking more for the comfort of an X type Jaguar.(any colour).